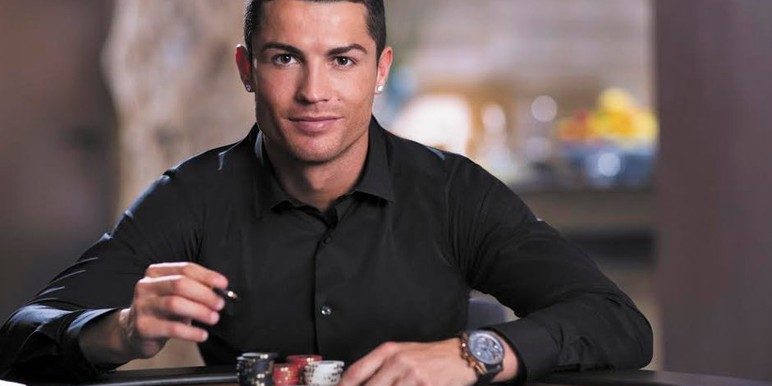 The top soccer player in the world joins a growing list of sports superstars that are being used to expand the fan base of online poker.

Cristiano Ronaldo, considered by many to be the best soccer player/footballer in the world, has signed a deal to promote the largest online poker site in the world, PokerStars.

Ronaldo was seen earlier this month sporting a PokerStars patch, but he officially announced the new partnership to the world today by posting a video on his Facebook page for his 103 million fans to see. At the time of writing, his announcement had received more than 1.4 million views. PokerStars also hopes to capitalize on his 35.5 million followers on Twitter.

“I’m looking forward to taking my game to the online and live poker tables and meeting my fans head to head,” Ronaldo said. “Although football is my world, poker has always been my game. I’m very excited to join the team.”

“Ronaldo is one of the most famous names in the world and PokerStars is thrilled to partner with him. We look forward to him spreading his love of the game worldwide by sharing his PokerStars experiences with his huge social following and fan base,” said Michael Hazel, interim CEO of PokerStars.

The signing of Cristiano Ronaldo, and the signing of fellow soccer superstar Neymar Jr. earlier this month, demonstrate PokerStars’ commitment to leveraging social media as a means to expand its online poker player base.

The two soccer superstars are just the latest sporting figures that have agreed to back the world’s biggest online poker site. Other sports ambassadors in PokerStars’ stable include tennis great Rafael Nadal, soccer legend Ronaldo (a different Ronaldo), and Olympic gold medalists Fatima Moreira de Melo from Holland and Marcus Hellner from Sweden.

PokerStars’ emphasis on social media also extends to the poker players it sponsors. The phenomenon of live streaming online poker on Twitch has certainly caught the attention of the executives at PokerStars as it has recently signed the most popular online poker live streamer, Jason Somerville, and many of its top poker superstars such as Daniel Negreanu and Bertrand “ElkY” Grospellier have begun live streaming as well.