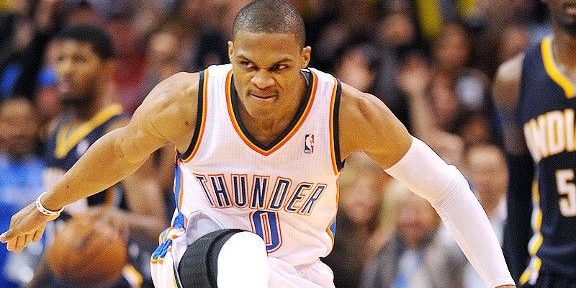 NBA star Russell Westbrook is more interested in playing poker than preparing for his opponents according to a recent interview.

The Oklahoma City Thunder point guard recently spoke to the media after his side’s 88-104 loss to the Detroit Pistons.

Despite notching up 33 points, 15 rebounds and eight assists, Russell Westbrook couldn’t help Thunder secure the win and that prompted one journalist to question his pre-game strategy.

Studying Poker Faces Instead of Players

While most NBA players will study footage of their opponents before a game, Russell Westbrook explained that he doesn’t pay much attention during training. In fact, instead of running through tactics with his coach and teammates, Russell Westbrook spends most of his time playing poker.

“I don’t worry about other people. Usually I just sit out and chill, relax, I play poker on my phone, play spades on my phone, listen to music,” Westbrook told reporters.

Now, without knowing what sort of “poker” Russell Westbrook is playing, it’s hard to speculate on whether he’s making money or not. But, it’s worth noting that he probably wasn’t playing for real money.

Unless he’s found a way to circumnavigate the geolocation software used by real money poker sites in New Jersey, Nevada or Delaware, he’s probably perfecting his skills on a play money platform.

Although we’ve yet to see Westbrook cash at the WSOP, he does play in some high stakes private games alongside fellow basketball stars and actors, including Tobey Maguire. In fact, Westbrook has also impressed Phil Hellmuth with his skills at the felt. Back in 2015 the Poker Brat told FOX Sports that pro athlete plays like a “professional level poker player.”

Fortunately, his love of poker doesn’t seem to be affecting his performance (he’s averaging 32.0 points per game), but a few slips on the court could easily cause him to regret his recent admission.

Of course, news of a professional basketball player enjoying a few rounds of poker is nothing new. Over the last few years we’ve seen a number of NBA stars anteing up at the WSOP. In 2015 Earl Barron finished 613th out of 7,275 entrants in the Millionaire Maker to take home $3,044.

While LA Clippers forward Paul Pierce told WSOP reporters in 2014 that he plays poker because it make him “smarter.”