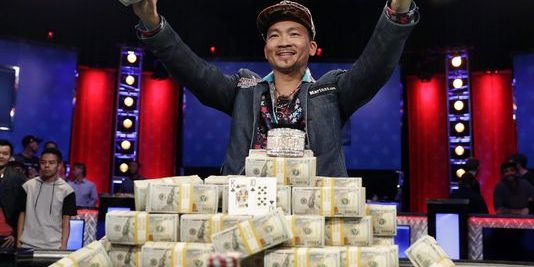 Of all the eye-catching numbers coming out of Qui Nguyen’s victory as the 2016 WSOP Champion early Wednesday morning — the $8 million first prize, the nine-hour heads-up duel, or even the 6,737-player field he outlasted — perhaps none is more surprising than this:

The former Alaska nail salon owner and failed professional baccarat player is the oldest winner of the $10,000 No Limit Hold ‘Em tournament since 2007, snapping a string of eight straight 20-somethings to grind through the biggest and most prestigious tournament in the annual gambling festival.

“To see somebody like him win, it’s going to give more people hope,” said Ryan Riess, who won the 2013 Main Event at the age of 23. “There’s going to be a lot of guys that may be in their 40s or 50s who may have been discouraged seeing all the younger players win.”

A Vietnam native who lives in Las Vegas, Nguyen eliminated San Francisco poker pro Gordon Vayo on the 364th hand of the final table at around 3:20 a.m. Wednesday to end an 11-hour session that followed an 11-day run in July to winnow the field down to a “November Nine.” Over three straight nights this week, Nguyen played more than 18 hours, including 200 hands from “shuffle up and deal” on Tuesday afternoon to the confetti cannons that celebrated his winning hand.

“It’s absolutely a grueling grind,” said Jason Somerville, who won a $1,000 No Limit Hold ‘Em bracelet in 2011, at 24, and has finished in the money at the Main Event twice. “Remember that you’re not just playing long sessions: You’re on the biggest stage in poker; you’re under the bright lights. That whole thing is a pressure cooker like none other in poker. It’s really unique in life.”

From its origins in barrooms and basements, poker has emerged as a billion-dollar business — the World Series of Poker alone includes 69 events over 51 days in which 107,844 entrants played for $221,211,336 in payouts. As the game grew, it attracted not just older Texans in cowboy hats but young chess, math and computer prodigies who played thousands of hands online in the time it would take traditional gamblers to play one-tenth as much.

That’s enabled younger players to compete with — and even surpass — their more experienced competition. Young player say their age gives them the stamina necessary to outlast fields that now run in the thousands.

Phil Hellmuth was 24 when he won the Main Event for the first time in 1989 (in a field of just 178), but five of the eight winners since 2007 have been younger than that, including 2009 winner Joe Cada, who was about a week shy of his 22nd birthday.

Somerville noted that Nguyen was only 39.

“It’s not like he’s 65, which would really be surprising,” he said.

Nguyen didn’t take the traditional route to the final table. Nor did he make his name playing online like the younger generation of players.

Instead, he used his earnings at the nail salon to finance a baccarat habit that busted him before he turned to poker. With only one WSOP finish in the money and less than $53,000 in career tournament earnings heading into the Main Event, he was one of the least accomplished players at the final table.

But Nguyen used an aggressive style that forced Vayo to fold a better hand dozens of times down the stretch until his stack had dwindled and his choices were limited.

“He kind of played like a 20-something. He was very aggressive, very courageous,” said Somerville, who has more than $6 million in earnings — about one-third online and the rest in live tournaments. “There’s a lot of ways you can be successful in poker. There’s not just one way to do it. But there’s no shortcut to putting the hard work in: studying, practicing training. You really have to put in the hours.”

Nguyen and Vayo did that — all in one night.

More than 10 1/2 hours into the final session, Nguyen held a 5-to-1 chip advantage when he was dealt a king and 10 of clubs. Vayo got a jack and 10 of spades and pushed in his last 53 million chips.

The two players stood together at the rail to watch the five shared cards come out.

The flop — the first three community cards — was a king-nine-seven, giving Nguyen a pair and Vayo the possibility of a straight.

Then came an inconsequential two, followed by an equally harmless three.

Nguyen was the winner.

The two players hugged, and Nguyen’s supporters bounced over the rail to celebrate with him.

In addition to one of the biggest prizes in poker, Nguyen receives a $50,000 bracelet made from 427 grams of white and yellow gold and more than 2,000 diamonds and rubies totaling more than 44 carats. The centerpiece opens like a locket to house the hole cards from the winning hand.

“I’m so excited. I don’t know what to say,” Nguyen, wearing his trademark raccoon baseball cap, said on the TV broadcast. “I just tried to remind myself to never give up, to never give up. It was tiring, it was tough, but I wanted to stay aggressive and never give up and thankfully for me it worked out.”

Cliff Josephy, a 50-year-old former stock broker who was the oldest of the “November Nine,” was eliminated in third place and collected $3.45 million.

Daniel Negreanu, a six-time bracelet winner who is 42 but known as “Kid Poker,” said older winners could become more common because of laws against online poker in the United States.

“Without the ability to play poker online, younger players have a more difficult time amassing the experience necessary to be competitive at the highest levels,” he said. “The barrier for entry for younger players is more significant today as a result. Until that changes, you can expect the average age of the winners to increase along with it.”

But Riess said he didn’t think the presence of two older players among the final three was an indication that the trend toward younger winners is going to reverse any time soon.

“It’s definitely wide open,” Riess said. “There are a lot of great players that are older and a lot that are younger. But as a whole, I think the younger players are still ahead of the game.