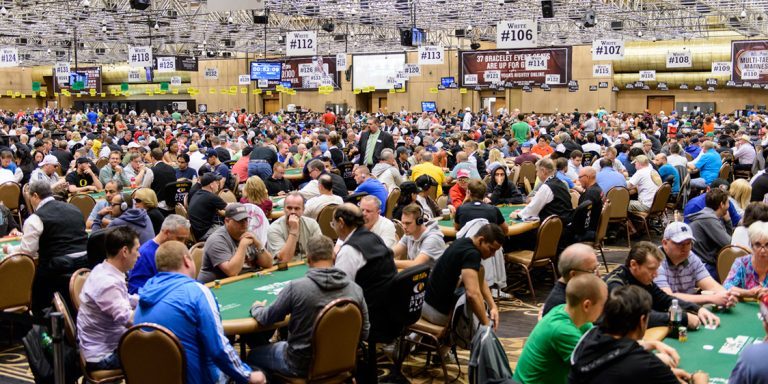 Nevada poker rooms raked in $16.67 million in profits from cash games in June, according to the latest numbers released by UNLV Center for Gaming Research, proving once again the “poker is dying” crowd knows not a thing. It was the best month the state had seen since June 2007 ($17.6 million).

That year, Jerry Yang would be going on to win the WSOP Main Event. Poker was near its peak in popularity. Online poker in the United States was thriving (despite the pullout of PartyPoker post-UIGEA). Shows such as High Stakes Poker and Poker After Dark were considered must-see TV.

Internet poker is barely still a thing in America and televised poker no longer airs in primetime on major networks. But it’s clear that hasn’t stopped the game from growing.

Nevada saw a 3.3 percent profit spike last month compared to June 2016, according to the UNLV data, and the World Series of Poker is bigger than ever, even despite lackluster TV ratings.

Thousands of bracelet hopefuls flock to Sin City each summer to compete in the WSOP, as well as side events and juicy cash games around town. In Las Vegas, June and July are the most profitable months for poker rooms each year.

There are more tables in Nevada during the WSOP than the rest of the year because the Rio adds dozens of cash game tables during the summer. But the WSOP set a 48-year record with 120,995 entries over 74 bracelet events this summer. With so many people in Las Vegas for the Series, it’s no surprise the state saw a spike in poker revenue.

However, that doesn’t mean there haven’t been shifts to keep games profitable for casinos. In June 2017, there were 731 cash game tables in operation in the state, a 10 percent decline compared to the 960 in June 2007. Additionally, the total number of poker rooms in the Silver State has dropped from 104 to 62 over the past decade.

Another positive sign for the game: poker profits in Nevada in June have increased each year since 2014. The UNLV Center for Gaming Research won’t release July figures until the month concludes, but a third consecutive year of growth seems likely.

Chris Moneymaker’s historic WSOP Main Event in 2003 spiked a poker boom few saw coming. Since that memorable day, the game has had its ups and downs, but it seems in Nevada and elsewhere around the world, we’ll never see popularity levels drop to a pre-2003 era.

Poker is not a dying game. We continue to have numbers to back up that claim.

Put poker skills on the line. You can practice as much as you need on the tables at Cafrino and get all the practice you need while winning real cash!