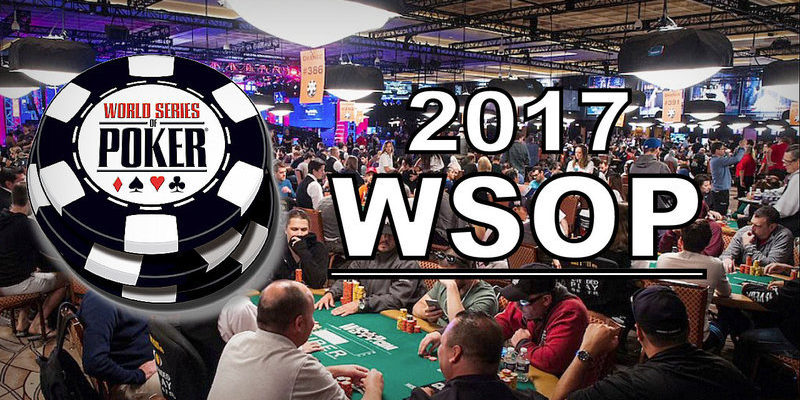 The 2017 WSOP kicked off Wednesday morning at the Rio All-Suite Hotel and Casino in Las Vegas with the first of 74 events. The 2017 summer series officially got cards in the air with the $565 no-limit hold’em Casino Employees event.

A second event, a $10,000 Tag Team tournament, is scheduled for 4 p.m. and promises to feature a team consisting of decorated Olympian Michael Phelps, along with high-stakes poker pros Antonio Esfandiari, Brian Rast and Jeff Gross.

But before the notables showed up, the registration line was filled with hopefuls looking for their shot at poker glory.

Some like Marcus Perez, who does facilities maintenance at the Bay 101 Casino in San Jose, California, are hoping to improve on a past finish.

“I’m just coming to try and bink some money,” Perez said. “This is my third try, after cashing the first time. I don’t get to play too many tournaments, but for the World Series of Poker, I’m going to try and make it out.

Others, like Ray Ragawski from Chicago, Illinois, are playing in their first ever event.

“I’ve always liked the action, but never got to play.” Ragawski admitted. “This year I came out to deal, so I figured I’d take a shot in the Casino Employees event.”

The biggest change announced for the 2017 edition came in early May, when Caesars declared that the November Nine concept was finished. Instead, the main event will play down to a winner on July 22.

The tournament schedule has added eight new events, including the aforementioned $10,000 Tag Team, the $365 buy-in Giant, and a $2,620 Marathon tournament. There are also three online bracelet events on the schedule, including a $1,000 no-limit hold’em online championship event starting on July 7.

Check out the full schedule.

As far as quality of life changes for players in 2017, the big difference will be that credit cards will be an accepted form of payment at live registration windows. Credit cards can now be used for buy-ins of up to $10,000 this year, a sizable increase from the $1,500 maximum of 2016.

The Pavilion, Brasilia, Miranda and Amazon ballrooms remain the primary locales for the estimated 500 poker tables to be used this year. Once again there will be around-the-clock tournament, satellite, Daily Deepstack and cash game action on offer at the Rio.
For those advancing past the first day, restarts for 11 a.m. bracelet events are at 12 noon. Events that start at 3 p.m. will restart at 2 p.m. the next day, with 10 or 10.5 levels being played each day until a champion is crowned.