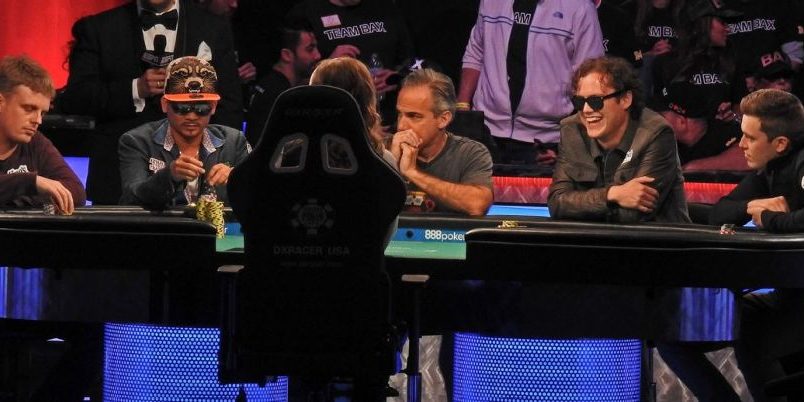 When it comes to watching sports on television or in person, it’s all about me. I want to be entertained. I want Poker heroes and villains. I want to have someone to cheer, and someone to boo. I want to laugh. I want to curse. And every now and again I want to see a moment thrilling enough to force me to get up out of my seat.

Poker used to provide that for me. It was the foundation for some of my favorite “reality shows” a decade ago. Not only would I watch the World Series of Poker every year, but I would watch the World Poker Tour on The Travel Channel, “Celebrity Poker Showdown” on Bravo, “High Stakes Poker” on GSN, “Poker Dome Challenge” on FSN, “Poker After Dark” on NBC and I’m sure a handful of other now-defunct shows.

I didn’t necessarily watch because of the poker; I already got my fix of bad beats at the hands of my little brother, who like millions of others briefly wanted to become a professional poker player after watching Chris Moneymaker win the 2003 World Series of Poker. I watched because of the characters I had become connected to while watching all these shows. I developed this bond because they all talked at the table and revealed a human side of themselves I either liked (Antonio Esfandiari), disliked (Phil Hellmuth) or was simply apathetic to (Joe Hachem).

It was similar to my love of pro wrestling. When it comes to the art of the squared circle, I’m not a purist who watches for five-star matches replete with every move from an arm bar to a wheelbarrow. I love the guys who can get on the microphone and rile up the crowd.

Like many others, I started to lose interest in poker as a televised sport before it was hit with its “Black Friday” in 2011. The shows became stale, there was never an influx of new young stars to mix things up and there were only so many times I could hear the same jokes from the same players and commentators.

But I was told the World Series of Poker main event final table was the one time where poker once again felt like it did a decade ago. For three days in the fall it was once again a spectator sport, drawing big crowds for a nationally televised event worth millions of dollars for the nine players at the table.

After attending this year’s “November Nine,” I came away yearning for the characters that made me fall in love with the game as I tried to stay awake until the final hand.

No tickets were needed to watch the final table, but there were times when it felt like a library card might be needed. For the better part of Sunday, Monday and Tuesday, the quietest place in Las Vegas was the Penn & Teller Theater, which has been the home of the “November Nine” since 2008.

The characters, drama and banter (ranging from collegial to contentious), which made poker such a fun sport to watch a decade ago, were completely absent inside an eerily quiet 1,475-seat theater where ushers roamed the aisles like teachers through a classroom to make sure no one was on their cell phones.

The only voice that could be heard from the stage during each hand was that of Jack Effel, the vice president and tournament director for the WSOP who doubles as the play-by-play announcer for the in-house audience. The players had their own cheering sections inside the theater, which made up much of the live crowd that diminished with each day as players were eliminated.

Michael Ruane, 28, had the most boisterous section, with many of his friends dressed as pro wrestlers from the 1990s. Las Vegas resident Qui Nguyen, 39, had a ton of local support as they chanted, “Who win? Qui Nguyen!” each time he collected chips. And those cheering for Kenny Hallaert, 34, mixed in some European soccer chants. But people watching a crowd filled with friends and family is only interesting to a certain point.

The oldest and most recognizable player at the final table, and the chip leader when play began, was 50-year old Cliff “JohnnyBax” Josephy, who had previously won two WSOP bracelets. While normally engaging, Josephy was mostly silent for the first two days and even went against the grain by wearing glasses and a hat on the final day, which he never does and previously said he was against.

“There’s more tension at the final table,” Josephy said. “Everyone is tense. They’re playing for money that many people haven’t seen in their lives. It’s understandable that people don’t talk but everyone is friendly. Everyone likes each other. This is a group of guys that really like each other. Everyone is nice.”

Effel echoed those sentiments after the second day of play as the chips for the final three players, Josephy, Gordon Vayo and Nguyen, the eventual winner, were put away.

“When you’re playing for $8 million you’re paying attention to every little thing that you do,” Effel said. “You’re hoping somebody else makes a mistake so you can capitalize on their mistakes. They’re more interested in playing poker than talking.”

It makes sense, of course, but it also makes me nostalgic for a time where the stakes didn’t make players go into their shells. The walkway leading into the Penn & Teller Theater at the Rio in Las Vegas is lined with oversized photographs of past WSOP main event champions. I didn’t recognize the past eight champions, all in their 20s, who looked more like fraternity pledges than poker champions. But I stopped when I got to Jamie Gold’s photo. Ten years ago Gold, who was a talent agent turned television producer, won the 2006 WSOP main event and $12 million, still a record, while outlasting a field of 8,773 entrants — also a record. It was the high water mark of a game that would soon see a significant dip in interest and participation.

Gold was an antagonist and a polarizing figure during his improbable run a decade ago, and one of my favorite players to watch. He talked big while bluffing with nothing, sweet-talked players into reluctantly folding better hands by telling them he would show them his hand and even flashed one of his cards to Michael Binger at the final table, causing Binger to lay down the winning hand. The reasons his antics were frowned upon by purists were the same reasons I enjoyed watching him play.

“You need to have players talking to have heroes and villains,” Gold told me over the phone after the first day of the final table. “Once you take away the character side of it, you’re killing the entertainment value and the reason why advertisers, sponsors and viewers would want to watch. I wasn’t that special, but I had an opportunity to create a character by speaking. Viewers want to watch personalities and have a storyline and an arc play out on television. For the most part, poker on television has become this mundane, mind-numbing endeavor.”

Even worse than the television viewing experience, however, is the live viewing experience. At least viewers at home are able to see the players’ hands while listening to the entertaining trio of Lon McEachern, Norman Chad and Esfandiari in the broadcast booth. But not even the personalities of the announcers can make up for the disconnect between the viewers and the players at the table.

Until that connection can once again be made, my poker needs will continue to be met away from my television — relegated instead to losing money to my little brother.