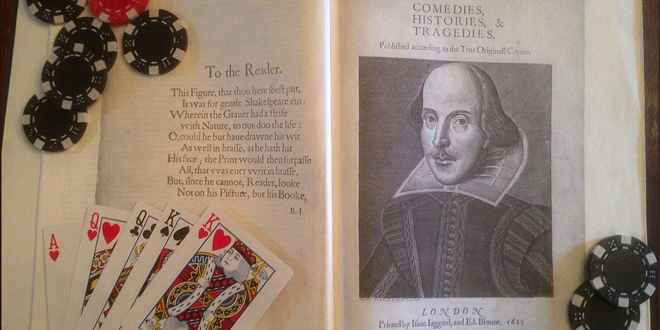 William Shakespeare, the unexpected poker coach. One of the many cultural gems in my new home of Asheville is North Carolina’s longest-running Shakespeare festival, with five free outdoor plays every summer. I recently saw the troupe put on Measure for Measure. I knew nothing about the play going in, but ended up loving it, in spite of its reputation as one of William Shakespeare‘s least liked works. It’s an extended meditation on justice, mercy, and hypocrisy. 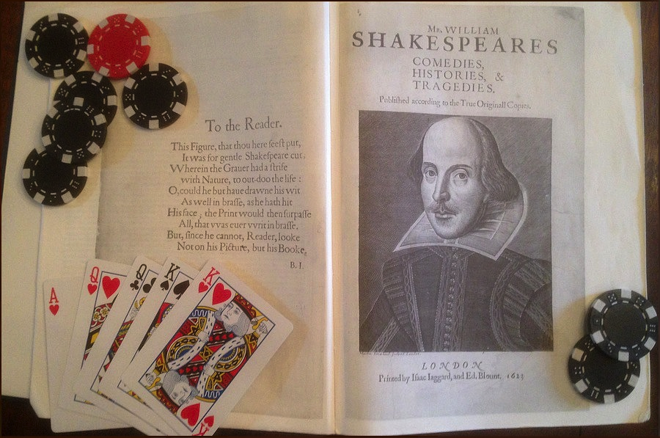 I liked it so much that I followed up the performance by studying an annotated edition of the play, trying to understand all the bits of difficult language that went over my head when seeing it live. As is my tendency, I ended up noticing a bunch of things that seemed to speak to the poker player in me.

1. Our doubts are traitors

I’ll start with what is probably the most famous line in the play:

Our doubts are traitors
And make us lose the good we oft might win
By fearing to attempt.

The applicability to poker is self-evident. Every time I play, I end up kicking myself for not pulling the trigger with a bet or raise in a difficult situation where I would have made more money if I had been braver. Whether on a bluff or a value bet, the reason for chickening out is always the same — the fear that my opponent will call with something better.

Later in the play, another character admits that she is torn — she’s “At war ‘twixt will and will not.” Again, that’s exactly the inner struggle I feel in such situations.

It’s possible that the single most profitable change I could make to my game would be to bet or raise in the situations where it feels right, without letting my “what if” fears second guess that impulse. How about you?

In Measure for Measure, Duke Vincentio, the ruler of Vienna, temporarily delegates his authority to his deputy Angelo. Whereas Duke Vincentio had been lax in enforcing the laws, Angelo, when newly put in power, is ruthless — much to the consternation of the citizenry. One of them laments,

the body public be
A horse whereon the governor doth ride,
Who, newly in the seat, that it may know
He can command, lets it straight feel the spur.

There is something to be said for this as a poker tactic, particularly in tournaments. That is, when you are moved to a new table, especially with a big stack, start pushing the other players around immediately, regardless of what cards you’re dealt. Announce your presence forcefully. Let them know that there’s a new sheriff in town, so to speak.

Of course, there’s a limit to how long you can get away with such bullying before the populace will rise up in rebellion. But you can pick up a lot of chips with less resistance than usual when they don’t know quite what to make of you. Furthermore, it serves the metagame function of establishing your image as a dominant player to be feared, even long after your short burst of pure tyranny.

If you’re on the receiving end of this tactic, it’s important to recognize it for what it is. You can be the one most to profit if you’re the first to stand up to the would-be table captain. A big-stacked player new to the table who is immediately betting and raising is much more likely to be trying to establish control than to be accurately representing the strength of his hands. So push back early and often.

3. The jewel that we find

Elsewhere comes this bit of wisdom:

The jewel that we find, we stoop and take’t
Because we see it; but what we do not see
We tread upon, and never think of it.

In poker, pots are our jewels. Of course we treasure those we win. But there are many that we wrongly let go without a second thought.

One of the easiest ways to increase your poker profits is to become bolder at picking up “orphan” pots. These are the pots that nobody seems to want. They’re not hard to identify — everybody’s checking rather than betting.

If you’re in position when the flop and turn have been checked around, you should be firing at these pots a very high percentage of the time. Your goal, in Shakespearean terms, is to see and take the jewels that everybody else is simply treading upon, not recognizing their worth.

4. Be absolute for death

In the play, Angelo has sentenced to death a man named Claudio. Claudio’s sister, Isabella, is trying to persuade Angelo to rescind the sentence, but we don’t know yet if she will succeed. The condemned man is visited in prison by a friar, who gives this advice:

Be absolute for death; either death or life
Shall thereby be the sweeter.

Learned commentators tell us that “absolute for death” here means “certain that you must die.” With that understanding, the advice seems sound. It is torment not knowing if you will live or die. But if you have accepted the certainty of death, you lose the fear of it, and dying will be easier. Should you miraculously live, your joy in that outcome will be even greater.

Save for one lucky player, everybody entered into a poker tournament will “die” at some point. If you accept this reality from the get-go, you can play better. If you are controlled by the fear of being knocked out, you will play too timidly to win.

Of course, you can take this too far. The idea is to learn to play fearlessly, not recklessly. Those are very different things.

Isabella, the heroine of Measure for Measure, is given some of the play’s most poignant lines, as she pleads with Angelo for her brother’s life:

Yes; I do think that you might pardon him,
And neither heaven nor man grieve at the mercy….

No ceremony that to great ones [be]longs,
Not the king’s crown, nor the deputed sword,
The marshal’s truncheon, nor the judge’s robe,
Become them with one half so good a grace
As mercy does.

Mercy is not a concept usually associated with poker, a game of ruthless self-interest. In fact, to the extent that mercy refers to deliberately not taking full advantage of another player, it can actually be unethical “soft playing.”

But even in poker there are circumstances in which showing mercy is commendable.

In June of this year, Lee Jones wrote an essay for the PokerStars Blog titled “Letting One Off the Hook.” There he describes an unusual situation in which he had the nuts in a cash game. His opponent moved all in, and Jones, of course, called. But the other player, upon seeing Jones’s winner, claimed that he had not said “all in,” despite both Jones and the dealer saying that that’s what they heard.

The floor was called, but the other player refused to surrender his or her remaining chips, and they had a stalemate situation. Jones describes what happens next:

“‘You know,’ I piped up. ‘It’s all just chips. Push me what’s there now and let’s get on with the game.’ I thought both floorman and dealer were going to hug me…. Look, I’m no saint, but when I added it all up, this wasn’t the time or place to bring things to a crashing halt over $300.”

In a recent issue of Card Player magazine, their anonymous columnist, “The Rules Guy,” reviewed the story and cogently discussed what went wrong and what might have been done differently to prevent the mess.

But the article concludes, appropriately, praising Jones for his mercy: “When you get a chance to be human, take it. The never-ending fight for EV doesn’t have to be a pact with the devil.”

I remember when David “Chip” Reese died, one of his high-stakes peers told the story of a time Reese played a private, heads-up cash game against an unknown player. Reese won all the money. The loser complained that something about the set-up had been unfair. It wasn’t true, but Reese gave him back his chips anyway, and let the game start over again.

Of course, Reese knew that he held a huge edge in skill and would likely win again, but the gesture also showed Reese’s capacity to put mercy ahead of pure profit.

I think Shakespeare would have approved.

Robert Woolley lives in Asheville, NC. He spent several years in Las Vegas and chronicled his life in poker on the “Poker Grump” blog.

Matt Damon Says Rounders 2 Would Be About Online Poker
July 29, 2016
Go to Top