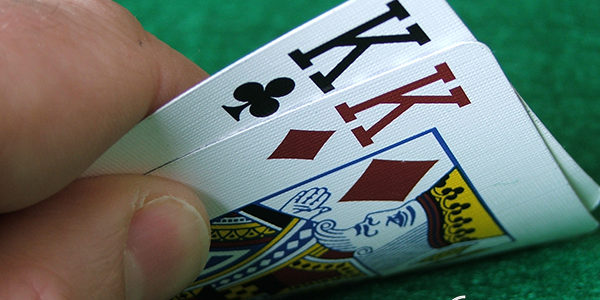 Understanding hand ranges helps you figure out what might be sitting in your opponent’s hand, and keeping track of hand combinations lets you calculate the various probabilities when playing poker games. Remember that you’re not playing against robots or computers like it sometimes happens when you’re in the online poker tables. Some people will take a look at a junk hand but not fold – instead, they’ll play. The opposite is true, too – sometimes they’ll fold with a pretty good hand that they would typically play. This means that reading hands before the flop requires some sophistication.

With this in mind, let’s take a look at some scenarios. We’ll assume a live $1 to $2 game with nine hands, assuming that most players put a minimum of $200 into play.

A $2 risk will get nits trying to scurry into pots even if they have a broad spectrum of hand quality. A nit who is open limping will fall in this range:

There are 1,326 possible opening hands, and this range holds 282 (about a fifth of them). Someone who plays this range plays about once out of every five times and folds the other fours. Of the 282 hands, 78 consist of pocket pairs (13 different possible pocket pairs exist, and there are six different ways to make each one). This means that nits pick up pocket pairs about a third of the time after they open the pot. This is a lot higher than the other player types. Some nits won’t raise preflop, but if they do, they probably don’t have hands hear the bottom of that opening range. They raise stronger hands and limp with weaker hands. Without the nuts, they generally won’t 3-bet.

The “regular” player is considered solid in no-limit small-stakes games. You won’t see a regular make awful plays, but you are likely to be able to identify some habits that you can use to your advantage. A lot of texas holdem regulars start showing these bad habits before the flop. They’ll play more hands than the nits will, but those additional hands usually just bring them bad results. They are more willing to open raise with such hands as JTs and 66 but they will still usually raise fewer hands than they limp. Their ranges generally weight toward aces. If an ace doesn’t show up, they will often hit weakly on the flop. If a regular 3-bets, consider folding unless your own hand is strong, because they are conservative in this area.

Fish are into poker because of the thrill that comes with bringing in pots, and they know that folding preflop isn’t the way to win them. They’re hard to classify with a particular range. They are likely to fold or call on the basis of other elements beside their current hand. If they’ve been on a good run lately, if they just got a racy text message, or if someone they want to beat is in the pot, they’re likely to call even if their hand isn’t that strong. Pay attention to their 3-bets to see who is conservative and who is all over the place.