The Art of the Poker Bluff 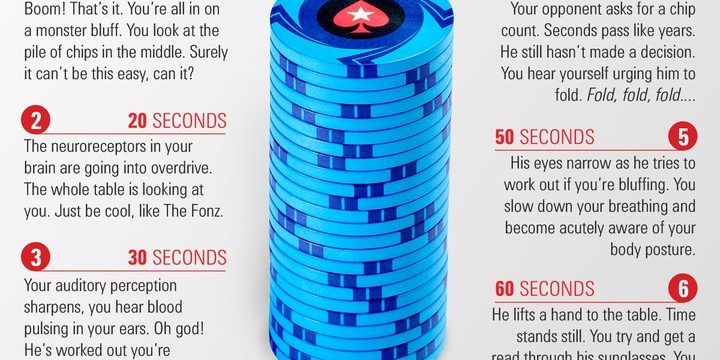 The bluff is one poker strategy that almost everyone things they understand. It is purely the act of deception, used to make a week hand look stronger than it is in hopes of getting the opponent to fold.

What makes it successful is knowing how to pick your spots. Understanding the six key areas to consider when deciding to bluff: your opponents, your image, the betting history of the hand, your position, the strength of your hand, and the size of the bet. Let me address them each in turn.

So how can you control what your opponent does? You bet your hand; he bets his. What can you do to affect his behavior?

There are many different types of poker players and you need to pick the right opponents to bluff against. Ideally you want to have only one opponent to bluff against. While there are times when your bluff will work against an entire lineup, most of the time you want it to be head to head. Similarly, you want to avoid bad targets for your bluff. You don’t want to bluff a guy who is so bad that he doesn’t think about your bet when he decides to call or fold? You don’t want to try to bluff a guy who is too loose to lay down his hand to your bet – even if he thinks you have him beat. After all, if he’s too bad to think about what your bet means – then he’s too dumb to lay down his hand no matter what you do. So don’t bluff a guy who calls too much. As the saying goes, it’s easier to bluff a good player than a bad player.

Along those lines, the recent history of your opponent needs to be taken into consideration as well. Some poker players get hammered so badly in a session that they tilt and become fatalistic. They’ll give away the rest of their stack with any kind of draw. They don’t make good targets of your bluff – even if normally they’re a good poker player. Conversely, if a guy has just won a large pot and is stacking his chips — he’s probably thinking more about preserving his stack – and may make a great target for a bluff – even if he’s not normally too swift. So at that point he’d make a good bluffing target.

Your table image plays a large part in whether your bluff will be successful. You need to be aware of what it is in order to exploit it. If you’re seen as a tight player your bets will more likely be believed as representing strength. Your bluffs will be more likely to succeed. On the other hand, if you’re perceived as a wild man – who throws his chips around like a drunken sailor  – your bluffs will almost surely fail – since you’re likely to be called. Take your image to others into consideration and make your bluffs accordingly.

Betting History of the Hand

Bets are not viewed in a vacuum. They are part of a narrative. Your bet, to succeed against perceptive opponents, needs to fit into that narrative to be believed. Your good opponent is not likely to believe that your bet on the river means you hit your flush if your betting up until that point didn’t indicate that you were on a flush draw.

Pure bluffs – when a hand has absolutely no chance of success unless your opponent folds – are less likely to win you money then bluffs that are combined with hands with the possibility of improving as the hand develops. These are generally known as “semi-bluffs”. I think of them as bluffs with a back up plan – a way to win even if they don’t win outright as a bluff.

The position you are in relative to the remaining player or players in the hand is an important consideration. Generally, you want to see how your opponent reacts to the board before you decide to bluff – making late position more advantageous than early position when bluffing. If he checks you can often presume him to be weak and bet. If you have to bet or check first, you won’t have the advantage of seeing his reaction to the board.

In no limit it’s important to think about the size of your bet when you are bluffing. Ideally, you will bet the least amount necessary to get your opponent to fold. But what is that amount?

It may seem that the more you bet the more likely your opponent will be to fold. As a practical matter this is rarely true, however. It’s better to think in terms of thresholds beyond which opponents will not call. And you want to get as close to the threshold as you can.

There’s a time and place to succeed with bluffing, which is a complicated matter. Yet novice players often fall into the trap of bluffing far too much. It’s important that you consider all the factors in this lesson to before you attempt to pull off a bluff. If you’re new to poker and are just starting out then it’s best to avoid the temptation to bluff. When you combine this knowledge with valuable playing experience, the art of bluffing will become second nature.