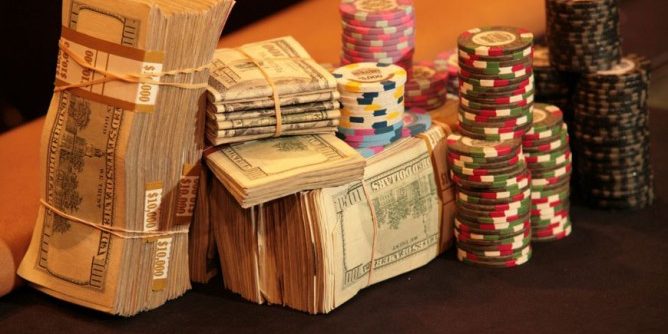 The transition from free poker to real money poker can be hard for novice players, but perhaps the best tip I can give to a newbie is to avoid passiveness and gain control of every situation, move or hand that can help ‘em to increase their bankroll.

If you think about it, you’re already in control of the cards that show up in your opponents’ hands. When an opponent goes into the pot, he has a range of hands that the action determines, as well as his stack size, position, table conditions and even how he feels. As the hand develops, though, you have the chance to bring that range of possibilities down in size, depending on your own line.

Perhaps the hardest part is that you can’t make him discard anything. This is why it makes sense to play big hands fast the majority of the time, because you’re headed to a big pot. If you have a medium hand and play it too quickly, though, the opponent can throw away what you beat and then swipe your stacks when the tables turn.

Each hand and each poker game has its own sorts of profitable situations, and some are easier to see and read than others. In O/8, for example, you have the nut high against two low opponents, the nut low with a flush draw against the nut low, and so on. In five-card stud, a hidden pair lets you beat your opponent’s open pair. In No Limit Texas Hold’em, you have over pair against top pair, set against over pair, set over set and set against top pair. The key thing you must always remember is that profitable situations involve more than just a quality hand. They also involve having a quality hand while your opponent has one that is almost as good – but thinks that his is the best. The best situation happens when he has a ranking right below yours, such as a Q-high straight while you hold the K-high straight. This gives you the chance to apply the most pressure.

To maximize your return from a profitable situation, you have to think about the hands which have the greatest potential for paying off and how they are likely to respond to a check, bet or raise at any point during tournament play. Keep in mind that you don’t just bet because you like how your hand looks and you see a flush draw out there on the board. If your main goal when playing poker is to win real cash, then each move you make should have a concrete purpose, such as betting because you anticipate that several other hands will call while others will fold, or checking because if you bet, your rival will fold hands that could pay off later.

This means that you have to take a line that lets you win as much as you can from the hands you beat. If you have a big enough hand to beat several other hands that your rival might erroneously believe to be the best, such as if you have AQ or 88 on an 8QA flop, just bet out. If it checks around to you with A6, just check it on through because no smart opponent is going to slip up against you. If you check behind, your rival might make a bad bet with a worse hand, leaving you with a profitable situation. It’s moments like this that can make or break your run.