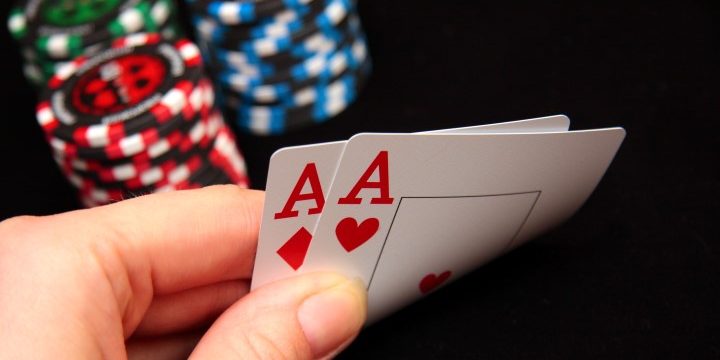 In real money poker, slow playing (also known as trapping or sandbagging) is a deceptive strategy that is generally the opposite of a bluff. A bluff is an aggressive bet with a weak hand, but a slow play involves passive or weak betting with a strong hand. The purpose is to get opponents to play in a pot when they might fold if you raise, or to make them put more money in the pot than they might have if you had been more aggressive, as with a raise or a swifter bet.  Slow playing gives away protection against possible improvement in opponents’ hands and risks the loss of a bet’s pot-building value if the opponents check as well.

In order to profit from a slow hand, here are some things that generally have to be true in order to win real cash:

Your hand has to be quite strong

The pot still has to be somewhat small

Let’s take a look at an example from seven-card stud. Bob gets three 5’s right away. Murray, showing a queen, bets first. Bob raises, and Murray calls. The next round brings Murray another queen, but Bob gets that fourth 5 (this has low odds of happening, but that’s the kind of strong hand needed here). Bob thinks that Murray either has three queens or two pair. Murray bets one more time, and Bob flat calls. Over the next couple of rounds, Bob only calls – and just checks if Murray doesn’t bets. Bob’s hand is so good that he’s unlikely to lose, so protection isn’t necessary. If Murray only has two pair and Bob is aggressive, Murray may fold, thinking that Bob’s hand is really strong (which it is). By letting Murray stay in for lesser stakes, Bob hopes that Murray will get up to a strong hand – but not strong enough. That will motivate Murray to keep betting – perhaps even raising – as the rounds go by.

If you’re playing with people who are observant, bluffing frequency influences how effective slow playing will be – and vice versa. If people think of you as an aggressive bluffer, opponents are already more willing to call your bets and raises. However, if people think of you as more likely to slow play, they are more likely to respect your bluffs.

One variety of the slow play is called “fishing for the overcall.” This happens when a player’s last card brings him a tremendous hand. The opponent in front of that player bets, and other opponents have yet to act. The player might normally raise with this hand, but if he just calls, other opponents might overcall instead of folding, as they might have if he had raised.  This is common in such high-low split games as Omaha, but it can also be applied in Texas hold’em.