Dirty Poker Tricks and How to Fight Back 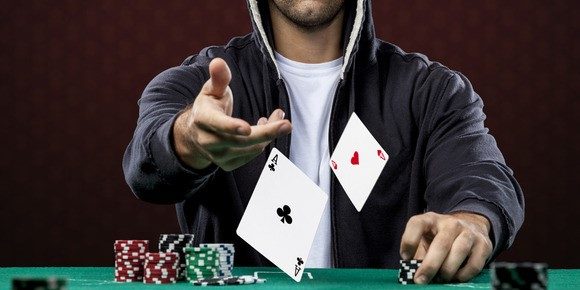 Dirty Poker Tricks and How to Fight ‘Em Back

When playing poker games, chances are that you will have to deal with some players that do things that are technically within the rules but are designed to prod opponents to take particular actions. Usually, there are easy ways to parry these attacks, but you have to be able to see them coming. The process of using these tricks is called “angle shooting,” and knowing what these stratagems look like is the best way to keep them from taking advantage of you at the online poker tables.

During the preflop, an angle shooter picks up his cards and then moves his wrist to look like he’s about to fold. However, he really holds onto his cards. He wants other people to think that he really folded and then do something that they wouldn’t have done otherwise. If several more people fold before action stops, he knows that raising is safer because there aren’t as many callers. If someone else does raise, he can just fold when things come back around to him.

So, if you see someone do the fake fold and then the next player takes a turn, make sure to speak up so that everyone knows that the fake folder still has his cards.

Getting off the betting line

If there are betting lines on a poker table, many angle shooters will take advantage of them. One trick is to move a stack of chips with some vigor just short of the line. He wants the opponents to think that he’s made a bet or a raise or call. You reaction will dictate whether he elects to have it stand as a valid bet or say that he had not really placed the chips into the pot.

To counteract this, if you see those chips stop short, ask the dealer to find out whether that’s really a bet before you do anything yourself.

Raising out of turn

In this situation, the angle shooter comes late in the action order and either is looking for a free showdown or a free card. In order to keep you from betting or raising, he says “Raise” or “All in” even when it’s not his turn. He wants you to think that he was making a simple mistake and that he has the intention of re-raising you.

Action happens out of turn quite frequently in live poker, and often it really is an innocent gaffe. However, if veteran players make this mistake suddenly, be aware that he might be trying to pull a fast one. He doesn’t really want you to bet or raise, which means that you should because he is likely to fold anyway.

In order to win real cash, some players hide their big chips or big bills down in their stash, or even behind their stashes, so that they are hard to see. When the nuts fall to them, they verbally say “All in” without showing their opponents how much they have. Then, when they win, the opponents find out that they owe much more than they had thought.

To prevent this, if you notice that a player is hiding cash or chips, ask the dealer to have him reveal it – or even ask for a count.